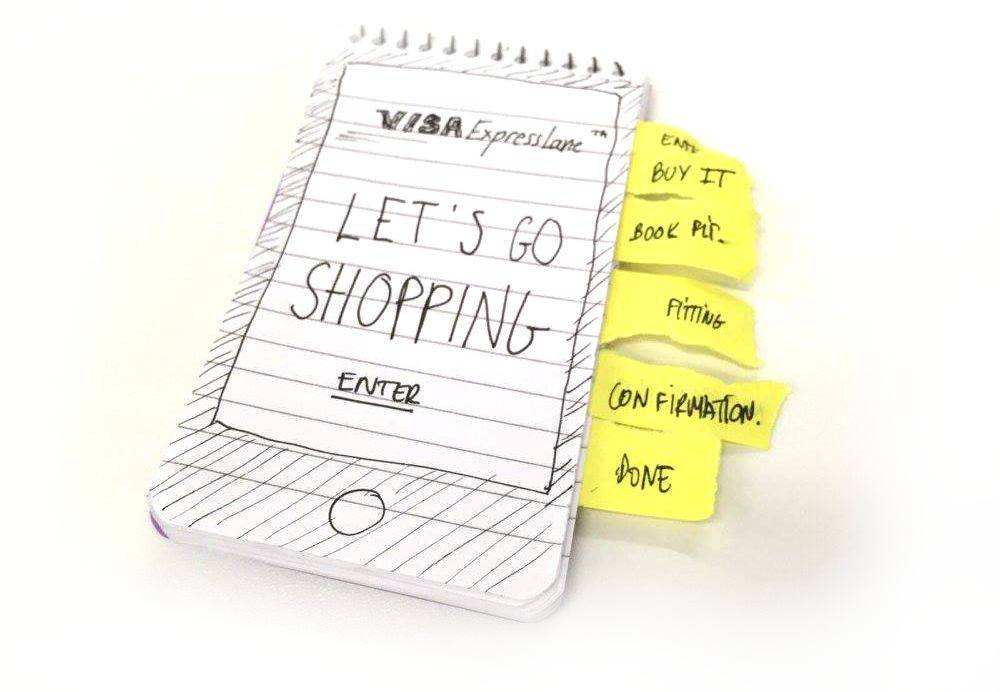 Paper prototype made by Virginia, one of the team members.

Support a team competing to win the Visa 48-hour Design Jam, designing the future of retail or in-car payments.

As mentor I coached, facilitated and taught. I gave them techniques to generate ideas, manage time and stay aligned.

The team came up with a really cool concept for purchasing clothes from a shop without queueing, based on the idea: “what if you could leave without paying?”. I was super proud of what the team achieved. It was impressive to see an idea emerge from nothing to research, prototype and pitch in 48 hours. It was also a great learning experience for me to practice coaching, and observe my techniques in use by others.

I received this feedback from a team member:

Jamie was an excellent design mentor at the Visa Design Jam. He had a lot of passion and creativity, and that really pushed us forward as a team. He kept the focus on the key challenges we wanted to solve, and guides us through a solid creative process. We created a product in the end that was very well received by the jury.

The weekend format split into four phases, with checkpoint presentations after each:

I helped the team realise that they were coming up with a mixture of problems and solutions, without a connection between the two at times. I drew two columns on a flipchart so we could separate problems from solutions and see if any were unpaired. By the end of this the team had chosen a really compelling problem/solution pair: “Avoid queues / Pay without the till”. I was so excited by this problem, it felt valuable, ambitious and real.

The first checkpoint required presentation of a persona, but didn’t specify the format, so I suggested the proto-persona format and helped them create one.

I helped the team to list out and prioritise the most risky assumptions, and design interview questions to ask people on the street. I taught them what makes good research (open questions, not asking people to predict future behaviour). This was extremely rapid-fire research design and execution, but nonetheless the team felt the problem was validated, and learnt some things that caused them to adjust their persona and their solution.

In phase three the team needed to construct a compelling prototype for the pitch later. I saw they had too many competing or complimentary ideas to solve the problem. I introduced story mapping, asking them to decide what’s the bare minimum, and what could be an optional extra. Separating out a core from optional extras that could be mentioned as future enhancements helped people let go of their good ideas and brought alignment and focus to the team.

Once we had a strong backbone of a storymap, I encouraged the team to sketch out a storyboard so we could all see and agree what the flow would be, and what parts would need to be prototyped.

The team handled the prototyping without much of my help, including creating this really cool flipbook showing the different states of the mobile UI. A gym lock was our first low-fi prototype for unlocking an item of clothing using a code that appears in the app. But through prototyping this we learned that typing a code felt too clunky and we really wanted to present the more ambitious vision of using RFID to unlock clothes.

I asked the team to practice the pitch early, just halfway through the prep time even though it was clearly not finished. In practising it became clear which parts were strong and which were weak and that helped focus the team where to put the rest of the preparation energy.

I learned over the course of the two days that most of the techniques that I’ve considered design techniques (problem-solution matrix, persona, story map etc) were actually more valuable as alignment techniques. Whenever I felt the team were misaligned, finding an exercise to generate a shared visual artefact really helped resolve things.